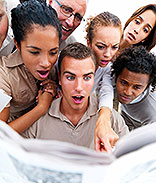 What can you learn from the latest Singles in America Study – the largest and most comprehensive look at the dating habits, sexual practices, and lifestyles of single men and women ever conducted? I broke the story on Yahoo in February 2013.

For the third consecutive year, I analyzed what the study results actually mean for real people. It’s a wide-ranging look at gender-based stereotypes (most go out the window), attitudes toward social media and privacy (surprising), the numbers of hook-ups and “friends with benefits” (FWBs) that actually lead to a committed relationship (more than you might think), and comparisons of singles vs. marrieds and straight vs. gay (the lack of differences is the real news).

When you write about a topic as emotion/opinion-focused as dating & relationships, it’s great when there’s hard data behind the trends. And there’s lots of data here, shedding new light on what makes one-third of the population (107 million people, according to the most recent U.S. Census data) really tick. My article includes interviews with the scientists behind the study, biological anthropologist Dr. Helen Fisher of Rutgers University and evolutionary biologist Dr. Justin Garcia of The Kinsey Institute.