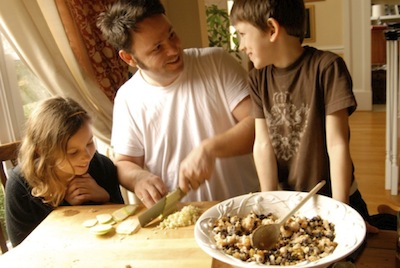 I wonder how many chefs were inspired by their own fathers’ passion for food? Chef and Dublin native Cathal Armstrong (pronounced with silent “t”) fits the bill.  In fact, he has his cooking enthusiast dad to thank for getting him into the food business.  “I never thought I’d do for a living what my father loved as his hobby.”  Now he’s passing the torch to his son Eamonn, 13, who, “wants to be the world’s greatest chef.”

Chef Cathal Armstrong flanked by daughter Eve (10) and son Eamonn (13), who love making memories with dad in the kitchen.

Cathal and wife Meshelle created Restaurant Eve and Eamonn’s (named after their two kids, ages 13 and 10, respectively) – as well as several other restaurants in northern Virginia – where they serve up ever changing, delicious, and local fare. Cathal is also Founder of Chefs as Parents, a 3 year old DC-based non-profit dedicated to transforming how children are fed in the school lunch system. Initially contacted by White House Assistant Chef and Senior Policy Advisor for Healthy Food Initiatives Sam Kass to support healthy eating efforts on behalf of First Lady Michelle Obama, Chef Armstrong’s ultimate goal is to help schools actually purchase and serve healthier foods.  “But right now, we are focused on local advocacy, outreach, and education for parents, teachers, and children.” Talk about creating a great Father’s Day tradition.  Other local dad chefs helping the cause include David Guas (Bayou Bakery), Robert Widemaier (Marcel’s, Brasserie Beck), and R.J. Cooper (Rogue 24).

This father’s day, Cathal’s plan centers around creating healthy food traditions at home with a family cookout, as he and his kids practice Tae-Kwan-Do, which has become a shared father-child hobby.  There’s got to be a safer way for a chef to get his kicks. But maybe the family that cooks and kicks together, stays healthy together.

Chef Armstrong picks a shiro plum off the tree growing in his garden behind Alexandria’s Restaurant Eve.