On the 60th Anniversary of The Lavender Scare, Don’t Forget About LGBT Employment Discrimination (April 2013) 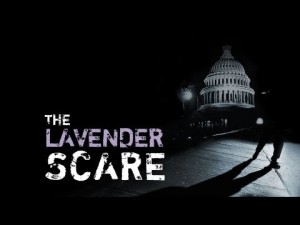 Did you know that this year marks the 60th anniversary of a witch hunt against gays and lesbians that was as aggressive and vicious as any in modern American history?

On April 27, 1953, the President of the United States ordered the firing of every gay man and lesbian working for the government in what is now known as The Lavender Scare. Thousands of gays and lesbians lost their jobs, either by being fired outright or by being threatened with investigation. Some tragically took their own lives rather
than risk the shame and living out what they thought would be shattered lives. A courageous few fought back, but can you even imagine the obstacles they must have faced?
It’s astounding to consider, especially after our current president just included the fight for LGBT equality in his inaugural address, and forever stamped the significance of the gay rights movement’s galvanizing Stonewall Riots into a trifecta of social movement beginnings, alongside the African American civil rights standoff in Selma
and the women’s rights movement’s groundbreaking convention in Seneca Falls.

To quote President Obama: “We, the people, declare today that the most evident of truths – that all of us are created equal – is the star that guides us still, just as it guided our forebears through Seneca Falls, and Selma, and Stonewall.”

In 2009, I wrote and produced a 22-part multimedia campaign called The Stonewall Riots: 40 Years Later, that captured the stories of those who’d led gay rights efforts at Stonewall in 1969, and during subsequent years as well. The multimedia series won several awards, including the GLAAD 2010 Award for Outstanding Digital Journalism. I’m most proud of the fact that we captured real life heroes’ tales while they were here to tell them in
their own words. I didn’t imagine the equality leaps that have been made in the last few years. But through my interviews then, I did get a sense of how employment discrimination and what became known as The Lavender Scare had impacted so many gays and lesbians.

Now a new film documentary on The Lavender Scare – with an award-winning filmmaking and production team led by Emmy-winner and former producer for 60 Minutes Josh Howard – is capturing the real life tales of this scare, which lasted longer and was arguably far more ruinous in many ways than the more famous McCarthy
Era red scare.

We may never return to a time when a President will issue an executive order demanding the ouster of gays and lesbians from their jobs, but as the The Lavender Scare shows, the damage done before Stonewall cannot be forgotten – nor can anyone confuse progress with a job finished. We have a long way to go still.

Beyond its relevance to the historic struggles of the LGBT community, The Lavender Scare film is a lighthouse, illuminating the facts facing us today.

As this recent interview in Metro Weekly explores, ENDA is still a controversial and political hot potato that needs to be addressed.

This is why I think the story of The Lavender Scare is as relevant today as it was 60 years ago, and why I am raising awareness about the film. Here are a few ways you can get involved and spread the word:

Dave Singleton, an award-winning writer, Yahoo columnist, and author of two books, is helping the filmmakers raise awareness about The Lavender Scare film. This originally appeared as  blog post on SAGE’s website.