Behind Every Great Woman There’s a Fabulous Gay Man: Advice from a Guy Who Gives It To You Straight 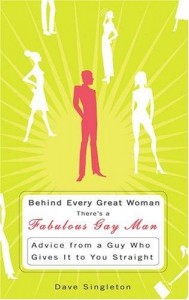 Published in 2005 by Penguin, Behind Every Great Woman There’s a Fabulous Gay Man delves into the powerful dynamic between gay men and straight women. Julia Roberts and Rupert Everett had each other in My Best Friend’s Wedding. Sarah Jessica Parker had close gay male friends in Sex and the City. It’s definitely a two-sided relationship– gay men count on their female friends in what is now an archetypal friendship. At its heart, the book explores the concept of agenda-less friendship since many gay men and straight women seem to have a relatively pure dynamic.  Most relationships have some sort of agenda attached. But gay boyfriends are not brother, husband, boyfriend, dad, or girlfriend. Many are, however, consultant, confidante, emotional multi-tasker, best friend, non-judgmental, not competitive with women, empowering, and funny. Increasingly, gay males are friends with straight men, and act as interpreters, not “yes” men. The needy, codependent gay man/straight woman stereotype is, hopefully evaporating. In its place is a healthier relationship that’s bigger than friend, steadier than romance, and responsible like family.  One reviewer commented, “Dave Singleton has dissected more ‘smart women, foolish choices’ than Ann Landers, Dr. Phil, and Carrie Bradshaw combined.  Described as a valentine from the author to the women in his life, the book includes rich, colorful stories from the 110 women the author interviewed.

Publisher’s Weekly:  March 2005
A gay man who wants women to feel great, look great and find love, Singleton is hilarious and hard-hitting. A little Queer Eye and a little Sex and the City, his self-help book makes 21st-century dating sound like snorkeling among sharks. You need a gay male friend, Singleton suggests, for his fierce loyalty and honesty, and as a guide to help you screen the metrosexuals and avoid the “seagull daters” (a.k.a., “a man who flies over you, looks better from a distance, swoops in, makes a lot of noise, craps on everything and then leaves”). Dating successfully, Singleton writes, requires women to embolden their style (“Don’t Blend In. Stand Out!”), behave smartly and carefully evaluate the respectfulness of their suitors. He prescribes “location, location” as a tonic to nights lost looking for eligible men in dysfunctional Cheers hangouts. Try pool halls, golf courses, adventuring clubs, continuing education, church and, yes, work. Despite some stereotypical depictions of astute gay men sharing their creativity with mixed up, fashion-blind gals, Singleton’s wisdom goes beyond his marketing specialist credentials. With humor, tact and compassion, he proposes ways to overcome the more stultifying aspects of women’s hardwiring, like their tendency to channel their “inner good girl” halfway through a hot fling. “Women overestimate the evil of men’s motives. You think men are acting awful when in fact they are just clueless and apathetic,” he points out in a section about pre- date anxiety. Elsewhere, he reassures readers, “You can be happy on your own.” A quick read with usually good advice and succinctly coined phrases for every modern dating situation, this book is plain fun. (Apr.)

Los Angeles Magazine:  June 2005
Most straight women out there will admit that it is their gay male friends who have taught them the most about men and relationships. After years of comforting and guiding female friends on their paths to love, Dave Singleton puts his stories to paper as he shares his sound advice to straight women all over the world. Step aside, Carrie Bradshaw.

For any slightly neurotic or fragile single woman who has endured the somewhat emotionally jarring and confronting read about what men really think in 2004’s He’s Just Not That Into You – written by a straight man and endorsed by Oprah – Singleton’s sentiment should be a comforting one.This is also a sentiment that sets the expectation bar high for a book that articulates and encapsulates the benefits of a straight girl/gay boyfriend relationship, to which Singleton gives an excellent perspective.This relationship is far more expansive than the stereotype of a co-dependent duo with a common interest in fashion, Madonna and men. For instance, Singleton’s idea that gay men and straight women who are considering alternatives to marriage and babies are both social pioneers who sometimes need to hold each other’s hands for support as they map their lives outside of traditional convention or expectation is a profound one.So, does the actual advice given by Singleton live up to its powerful social philosophies? Admittedly, much of the advice is hardly groundbreaking, and because the book covers so many topics, there is at times no room for Singleton to elaborate on what he is saying. However, the weaker parts of the book are saved by humour. Lists such as ‘The 10 Things Only Your Gay Best Friend Needs to Know’ and horror stories of suburban bowl cuts and Mr. Wrongs are genuinely funny.Ultimately, this is a book that deserves to be read because it is an important recognition of the straight woman/gay man relationship. Its ability to jump refreshingly between the light-hearted and the profound with the turn of a page is in itself a celebration of this relationship in all its fabulous complexity.