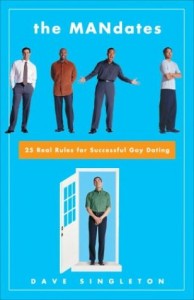 How do you win the dating game if you’re a gay man?  After many years of serial monogamy – and in the early years of the exploding online dating phenomenon – Dave Singleton went to the front lines to find out, exploring the lives of other gay men who found themselves on the dating fast track with guys they’d met from work, at the gym or bars, and, increasingly, on the Internet.  Thus, The Mandates was born—a laugh-out-loud but completely true set of rules about the making (or breaking) of men’s romantic relationships.  Published in 2004 by Crown, the book takes a populist approach to dating, drawing on the author’s 175 interviews with men – and some of his my own dating experiences – to tell our stories.

From the author: “My own experience and the experiences of other men have been funny, poignant, sometimes painful. It was my intent to bring a sardonic, funny voice to the topic – to laugh and learn from the many common experiences we all have or will share.  My favorite definition of comedy is ‘tragedy plus time.’  But there’s a serious side, too. It’s not like our stories are inundating the American landscape.  They aren’t. We are still a young movement. It’s been only 40 years since Stonewall.  That’s a drop in the bucket of time.  We’ve come a long way, but we obviously still have a long way to go until we have full equality as well as as full understanding of norms and traditions within our own community. I’ve read many of the books by psychologists on gay relationships, and though they were helpful, I wanted a book with a more accessible approach, with men’s stories told in their own voices.  Who knows what the future holds? But I know that dating trends and norms aren’t static. They change in step with social timing, new trends, and technology enhancements.

The Mandates doesn’t say there’s one set goal for gay dating.  There are several worthy goals, from finding the right guy to spend time with, to a full-blown rainbow gay wedding in Hawaii.  This book helps gay men clarify and reach their goals with practical advice and humor. 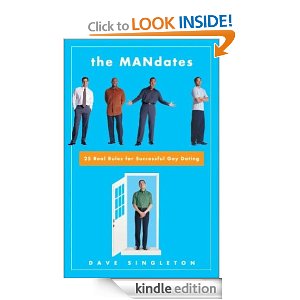 The book was welcomed with reviews and editorial features in:

“Across the world, eligible gay men are still ‘social outlaws,’ a ragtag gang of hormonally driven cowboys riding into romantic battle with guns, ‘ammo,’ and no clue,” writes Singleton, who spent many hours listening to his friends’ dating woes to formulate the rules he espouses here. A couple of his mandates could be applied to straight folks (“#22: Be True to Your Own Standards” or “#19: Ax the Word Ex”), but Singleton recognizes that most gay men don’t adhere to the conventional “till death do us part” rigamarole. Accordingly, he provides would-be Romeos with handy gay-specific tips like “Hit on Someone Your Own Size (And Double Your Wardrobe).”…Most readers will appreciate the author’s breezy but knowledgeable take on gay dating. (Jan.) Copyright 2003 Reed Business Information.

“You’ll love the clever prose, amusing anecdotes and recognizing you and your friends in these all-too-familiar scenarios.” – The Washington Post 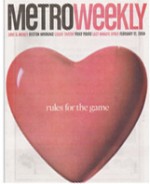 Metro Weekly: Cover Story on Rules for the Game

HOOK UP WITH A BOOK

We tell you where to turn for advice on love

When your friends are sick of hearing about your love life and its woes, your therapist is ready to give you a refund and your favorite bartender bans you for life, turn to a book. It won’t tell you to shut up, and often it can assure you that whatever you’re feeling, you’re not the first.  We might not be able to find the One for you, but we can guide you to the one book (or two) that’s right for you.

What it is: A set of guidelines not written specially for lonely women.

Who should read it: The single looking to date more successfully, not necessarily exchange rings.

Pros: The writer interviewed couples and singles and put their stories in the book. “I learned that there are 8 million gay men and four stories,” he says. It reads real. And whether you’re a gay man or a straight woman, this book teaches a lot. “The key to a successful relationship is not believing that everyone is imperfect, and therefore you should be happy if you find a guy with most of the traits you like. The key is drawing a line in the sand for what’s totally unacceptable. You have to decide what you absolutely cannot abide and then pray like hell you’ll get over the rest. This is called having standards.” Hilarious – and true.

Cons: One of the 25 mandates is, “Hit on someone your own size (and double your wardrobe).” Is shirt size the criterion you should be looking at, really?

Everyone saw the hype about The Rules, the book that seems to have been written by sadistic hell spawn claiming to be single women. Seriously, who could resist a woman who won’t go out with you Saturday if you don’t ask her out by Wednesday? Or who won’t call you back? Or who won’t hold a conversation with you for more than three hours because she wants to maintain “control.” Hot! Ranting aside, it’s easy for any straight guy or gal to peruse the self-help section of their favorite book haunt and find a bazillion paperbacks with guidance about dating promising brighter dating futures. But where can 8 million homosexual guys go for dating advice? Thanks to Dave Singleton, there is now such a book.

The book is smartly entitled The MANdates, but you won’t find any ridiculous or offensive instruction on how to trick someone into believing you’re not a cold and heartless ice being. Nay, Mr. Singleton instead gives thoughtful guidelines for keeping yourself emotionally in check whilst treading water in the gay dating pool, and he makes you smile in the process.

In The MANdates, Singleton reveals tips and tricks gleaned from his own experiences as well as lumps taken from 175 other soldiers on the front lines of the gay dating scene. He’ll give you a few of the most common characters you’ll meet, such as Peter Pansexual, “the guy who’s really flighty and who says he wants a relationship but really just wants the freedom. He may have wanted a relationship that day, but tomorrow’s a whole new day.”

He’ll also tell you a bit about the “poetic bait-and-switch body Nazi,” who will spout poetry and whatever sweet nothings he thinks you want to hear and will then reveal what he’s really like later on. Hmm, this is beginning to sound familiar and not so specific to the gay dating scene. But I digress.

In addition to dating archetypes, Singleton asks you to ask yourself what *you* want. Are you looking for a serious relationship or the occasional dinner date?

Without giving too much away, here are a few of those essential MANdates, taken straight off the back of the book:

MANdate #10: Everything you need to know, you learn in the first five minutes.

MANdate #12: The difference between Mr. Right and Mr. Right Now: Learn it!

MANdate #13: Things you should never, ever, for any reason, say out loud in the first six months of dating.

MANdate #24: Be your own “Judge Judy”: Evaluating Heinous vs. Forgivable Sins.

This fantastic truthful and humorous guide to dating has actually been touted as “The Bible for the Single Gay Guy.”

“This book is The Bible for the Single Gay Guy”

A guide for the gay man in the dating trenches, the MANdates is filled with rules of dating specifically for gay men. Singleton starts out by logically approaching the different types of men with guys like Peter Pan-sexual who dangles the relationship carrot but never really wants to commit and the “Bi-curious” guy who is about as straight as a circle… Can you say trouble with a capital T? Now who hasn’t dated guys like this?  Singleton outlines the 25 MANdates, or rules for gay male dating.  I don’t want to give away all Dave’s secrets, but since these MANdates are on the press release and the back cover of the book, here are a few words of wisdom for you until you get your own copy:

In short, this book is The Bible for the Single Gay Guy… Don’t go on another date without reading this paperback cover to cover!

The Mandates: 25 Real Rules for Successful Gay Dating, by Dave Singleton.   Review by Richard Labonte, who has read, edited, and written about queer literature since the mid-’70s.

You can’t always judge a book by its cover – or, in the case of this relentlessly upbeat advice book, by its quirky chapter headings. A skim of the table of contents suggests spun sugar. To wit (literally): rule 5, “Eager Beavers Gnaw Quickly, Then Drown;” rule 10, “He Opened His Mouth and His Purse Fell Out;” rule 16, “When Male Egos Collide – Mr. Titanic, Meet Mr. Iceberg.” But Singleton’s cheeky “mandates” do, in fact, provide adequate nutrition-rich relationship tips about self-image, expectations, grooming, first dates, moving in together, meeting each other’s friends, and even breaking up. The challenge with how-to books is to pass off basic common sense as something sagacious. This one does so with a zesty combination of witty matchmaking mantras, eye- catching design and packaging, and – for readers with really, really short attention spans – a lot of lists.